← more from
No Quarter
Get fresh music recommendations delivered to your inbox every Friday. 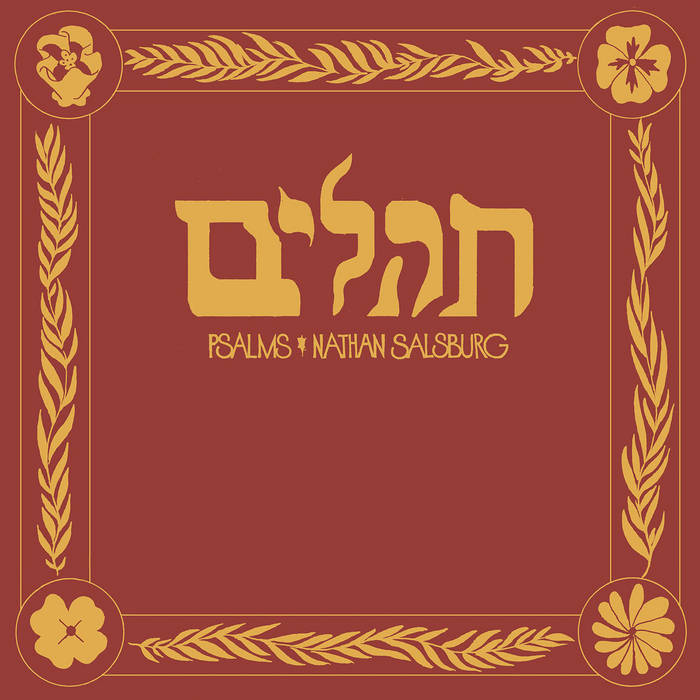 gpatkinson Another incredible album from Nathan Salsburg. So beautiful and unique. And his process was fascinating to read about. I really don’t know what to say except THANK YOU to Nathan and everyone involved in putting this record together. Favorite track: Psalm 33.

Psalms is a collection of new arrangements of Hebrew psalms—Tehillim—composed between 2016 to 2019, and recorded in their entirety, somehow, over the long course of 2020. The project was born of a desire for some kind of rigorous and creative Jewish engagement, which came to take shape in the irregular practice of opening a bilingual Book of Psalms at random, scanning the English (I don’t speak and can only haltingly read Hebrew) of a particular chapter for passages that resonated conceptually and emotionally, and scanned rhythmically. Copying those selections over to a separate page, I worked to thread them into new melodies with the ultimate intention of making them satisfactorily singable. The nine fragments of discrete psalms that comprise this record* were those I regarded as the most successful efforts, by which I mean most pleasing to sing and to play. May listeners find them similarly pleasing to listen to, and perhaps even to sing and play themselves.

My formative experiences with Jewish music were collective and participatory, at synagogue and summer camp in the ‘80s and early ‘90s, where the repertoire was heavy with “American nusach.” Played on acoustic guitars, combining liturgical Hebrew with contemporary English translations and Israeli folk-song lyrics, it was meant to be sung with maximum physical investment (jumping, shouting, dancing, swaying) for maximum emotional return, which it absolutely delivered. Its earnestness was its cardinal virtue, as it provided an experience of catharsis similarly guileless and really quite liberating for the young Upper Southern/Midwestern Jew I was. It was not, however, music that I could carry into adulthood—I was too old for summer camp; I stopped attending synagogue with any regularity; I sought more than unadulterated emotionalism. I became drawn, then, to Jewish music in which I was incapable of participating: in time, klezmer and cantorial performances on 78-rpm records; in space, the devotional traditions of Sephardic and Mizrahi communities.

So when I heard Dark’cho, David Asher Brook and Jonathan Harkham’s 2004 album of traditional Chasidic melodies and liturgical pieces, I was smitten by it and brought it in close. It was delicate, intentional music, made by sensibilities I felt in tune with. It was sung quietly and played sparely on instruments I might have chosen. Its spirit was of private meditation as opposed to collective ecstasy; its sound more of seeking than of finding. It was the stuff of aspiration, and it served as a guide to the practice from which Psalms emerged.

Despite the solitary genesis of the pieces on this record, I both couldn’t and wouldn’t have made it alone. The contributors, near and far, came to feel like a kind of creative chavurah—a collaborative fellowship that imbued the songs with a vitality of which a sole agent would be incapable. I am particularly grateful to dear friend and colleague James Elkington, who agreed to devise the arrangements and help wrangle and guide the performers, and to Noa Babayof, who offered crucial support: melodic and pronunciative. Any and all errors, however, are mine alone.

Who can discern his errors? Clear You me of hidden faults. (Psalm 19:13)


*“O You Who Sleep” is the one non-psalm, and is a moderately finessed arrangement of a Hebrew poem by the Medieval physician, philosopher, and poet Judah Halevi in a translation by Raymond P. Scheindlin.

Nathan Salsburg is a guitarist, composer, archivist and writer living in Kentucky. He is a frequent collaborator of songwriter-singer Joan Shelley, occasional guitar-duo partner of James Elkington, and has contributed to recordings by Bonnie "Prince" Billy, the Weather Station, and Jake Xerxes Fussell, among others. Salsburg is also curator of the digital Alan Lomax Archive. ... more

Bandcamp Daily  your guide to the world of Bandcamp